Beepo ends the year with an epic Rock and Roll Party

Beepo ends the year right with a Rock and Roll party last December 16, 2016 at Century Hotel, Angeles City. The night’s program was packed with surprises and exciting activities such as raffle draws, crowning of the Best Dressed, awarding of the Employees of the Quarter and the much anticipated Battle of the Bands competition.

Black leather, studded belts and tight jeans were among the few elements present in the get up of the Beepo staff. Some dressed up as iconic rock stars such as Patrick Stump of Fall Out Boy and Axel Rose of the famous 80s band, Guns N’ Roses.

The party was opened with a speech from our GM, Matt Garrett, and Beepo Co-Founder, Mark Engelmann, followed by a video presentation of the 2016 Beepo milestones and the nominees for the Beepo Employees of the Quarter. The crowd cheered and laughed as they looked back at the numerous activities held during the year such as the Beepo Carpool Karaoke, 60 Seconds of Truth and the various monthly events that each staff had the privilege to enjoy.

A rock and roll party won’t be complete without a Battle of the Bands! As the main event of the night, five bands rocked it out to win the 1st prize of 5,000 pesos. The competition was participated by Sunken Chip, Hidden Chemistry, Red Hot Chenah Bangeh, Web Progrockers and Dinah Muna Beh. Each band was asked to prepare two songs for the qualifying stage and one song for the final battle.

Sunken Chip slayed the night with the songs Viva La Vida and Champagne Supernova securing a spot in the final battle. They were joined by Dinah Muna Beh who played the classics, It’s My Life and Iris, and Red Hot Chenah Bangeh who turned up the heat with the songs What’s up and Like A Pill.

Before the final battle, an epic dance intermission was performed by the Beepo dance crew and a surprise participation by our Recruitment Manager, Jessie. The crew took on famous dance challenges such as the Fetty Wap, Jumpshot, Juju on that Beat and Eenie Meenie.

Each band had the audience on their feet, cheering and singing along to good ol’ rock music. Sunken Chip won the 1st prize of 5,000 pesos with their final song Use Somebody by Kings Of Leon. The 2nd prize of 3,000 pesos was awarded to Dinah Muna Beh and the 3rd prize worth 2,000 pesos to Red Hot Chenah Bangeh with their performance of Guns N’ Roses’ Sweet Child O’ Mine.

Over 30,000 pesos worth of raffle prizes were given away throughout the night. Among the top prizes was a 7.5 Sharp Washing Machine that was won by Jolly, an Asus Phone with powerbank and selfie stick won by Carlo and the Grand raffle prize that was won by Elsa, a 32-Inch Samsung TV.

Putting the “Star” in “Rockstar” with their stylish looks were Mitchee and Myron after being crowned as the “Rockstars of the Night”.

At Beepo, we don’t let the efforts of our hard-working staff go unrecognized, that is why every quarter, 4 outstanding employees are awarded with the “Best Employee Of the Quarter”. Out of the 22 staff that were nominated, Kenry, Joms, Jaymee and Regienald won the prestigious award plus 4,000 pesos each. 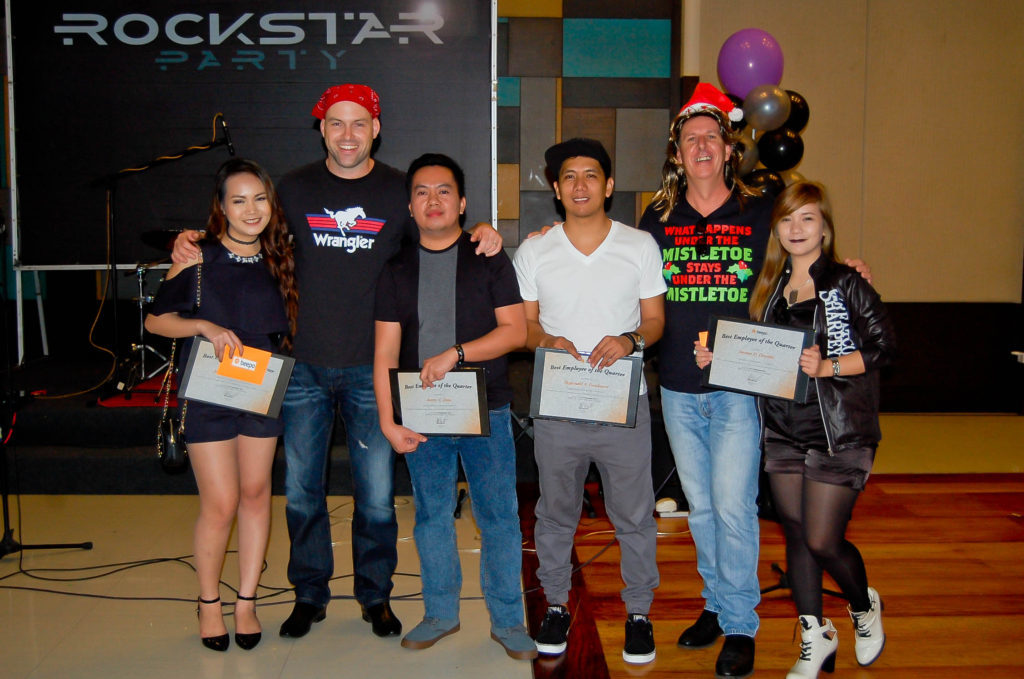 One of the comic highlights of the night was the Balut Challenge where Matt, Trish, Mark and our two awesome BDMs Nicole and Nick each ate the famous exotic filipino delicacy – Balut.

The party was ended with an encore performance from Sunken Chip and a Disco portion where everyone was given the chance to sing and dance the night away.

Want to have an epic night with us on our next party? Then apply now and take part in our awesome events!